Use IBM Bluemix, NoSQL Cloudant, OpenWhisk, Docker, and Twilio to Send text messages based on a Cloudant feed.

This post is a Part 2 in a series on serverless computing. The last post described how to build a simple but useful text messaging application written in Python, packaged in a Docker image on Docker Hub, and launched using the OpenWhisk serverless computing framework. The app was implemented to be entirely stateless, which is common in serverless computing but can be limiting for many practical use cases.
For example, applications that send text messages may need to make a record about the text message contents, the date and time when the message was sent, and other useful state information. This post will describe how to extend the application built in Part 1 to persist the text message metadata in Cloudant, a PouchDB based JSON document database available from IBM Bluemix. Since OpenWhisk integrates with Cloudant, it is possible to setup OpenWhisk to automatically trigger a Docker-based action to send the SMS once the text message contents are in Cloudant. An overview of the process is described in the following diagram. 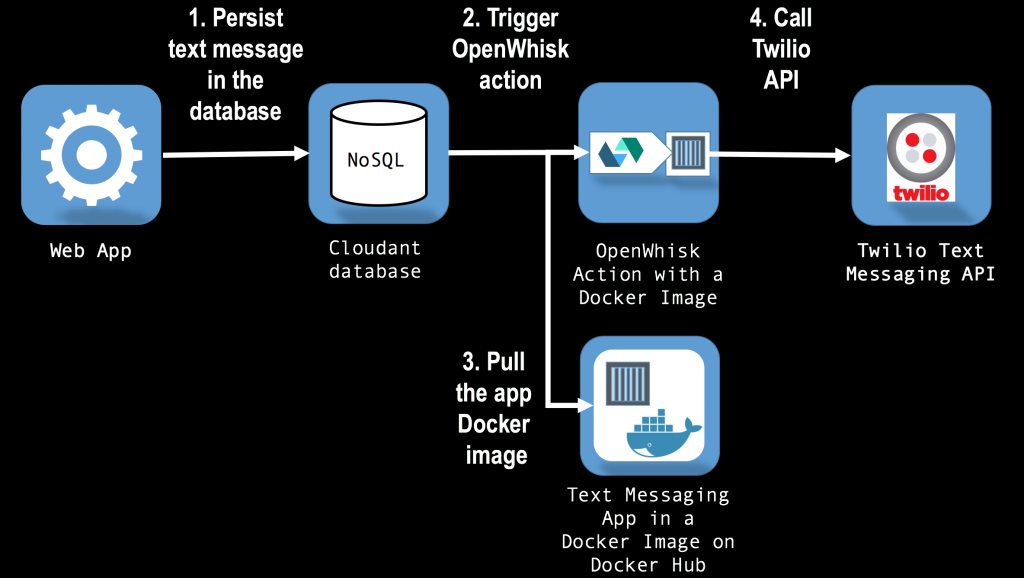 Make sure that you have completed the steps in the Part 1 of the series and have a working textAction in OpenWhisk that can send text messages using Twilio. You will also need to make sure you are registered for IBM Bluemix. To sign up for a 30 day trial Bluemix account register here: https://console.ng.bluemix.net/registration/
Next, download a Cloud Foundry command line interface for your operating system using the following link
https://github.com/cloudfoundry/cli/releases
and then install it.

In your console, type in

curl https://$USER:$PASSWORD@$HOST/sms -X PUT
On successful creation of a database you should get back a JSON response that looks like this:

wsk property set --namespace $ORG\_$SPACE
If your $ORG and $SPACE environment variables are not set, refer back to the section on creating the Cloudant database.
Next update the list of packages by executing

wsk package refresh
One of the bindings listed in the output should be named Bluemix_cloudant-deployment_cloudant-key
Run following commands to configure OpenWhisk to start the action in case if a new document is placed in the Cloudant sms database.

wsk trigger create textTrigger --feed /$ORG\_$SPACE/Bluemix_cloudant-deployment_cloudant-key/changes --param includeDoc true --param dbname sms
wsk rule create --enable textRule textTrigger textAction
The first command creates a trigger that listens to changes to the Cloudant database. The second command is a rule that indicates that whenever the trigger is activated with a document in Cloudant, then the text messaging action (textAction created in the previous post) needs to be invoked.